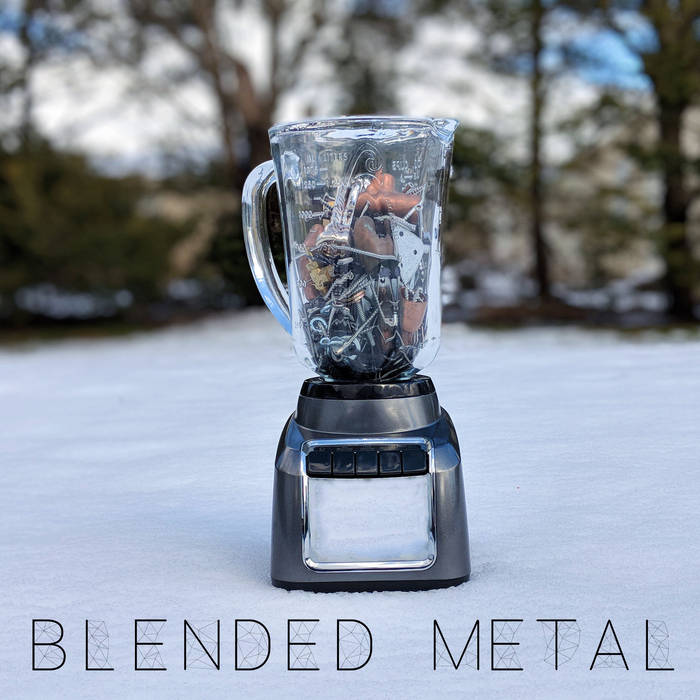 Los Angeles based electro-acoustic duo​ ​Laptop+Trumpet​ is proud to release their first EP on Cosmic Primitive Records​. An amalgamation from a previously recorded concert, sampling, and post production work, culminated in ​Blended Metal​. Extracted portions of the original improvisation are preserved in its original form, as samples are layered, twisted and manipulated becoming indistinguishable. Juxtaposing textures and evolving timbres intertwine, as droning and pulsating synthesizers encapsulate the extreme registers as the listener enters the world of Laptop+Trumpet.

Comprised of ​David Aguila​ on Laptop and​ ​Ethan Marks​ on Trumpet, they first met while attending​ ​Chosen Vale Trumpet Seminar​ in Enfield New Hampshire. During the seminar, Marks commissioned a piece from Aguila, that would later become the foundation in the formation of Laptop+Trumpet. The two began to improvise together, building electro-acoustic landscapes and extended trumpet techniques, forming a unique improvisatory language which feeds off one another's output. Laptop+Trumpet has performed in the Los Angeles area, including at ArtShare LA and CalArts R.O.D Concert Hall.

David Aguila is a Los Angeles based performer and composer from Florida. His work uses acoustic and electronic instruments, spatialization, and perception of sound, time, and memory which are conceptually abstracted to create sonic landscapes and performance installations. Aguila has performed as a trumpeter with orchestras, wind bands, improvisation and contemporary ensembles, traveling across the USA and Europe. Aguila also performs as a sound projectionist, processing instruments, voice, and performing contemporary music.

Aguila was a co-founder and co-artistic director of aLma.MaddR, an interdisciplinary collective dedicated to the creation and presentation of interactive and immersive new works that hope to provide meaningful and transformative experiences for audience members. He has Performed and produced music for Ted Taforo's album, You Are, and with the Los Angeles based band Snow Nerds. Aguila received his Bachelor’s degree (2009-13) in trumpet performance at the Eastman School of Music, where he studied under James Thompson. While getting his MFA at CalArts (2013-15), Aguila studied trumpet with Ed Carroll and studied music composition with Vinny Golia and Sara Roberts with a focus on spatial and electroacoustic music and interdisciplinary performance installation.


Ethan Marks is an LA-based trumpeter and performance artist reshaping the role of the instrumentalist in live music-making, transforming the performer into sculpture and installation piece. Emphasis and attention are placed on the physical gesture and the collision between body and the instrument as interface. Much of the sounds are similarly physical, tangible, subtle. They challenge the audience to listen deeply so that they may take that enhanced perception out of the performance and experience the world differently.

Marks is active in the LA experimental music scene, and he often collaborates with Vinny Golia, Ulrich Krieger, Thomas Sturm, David Aguila, Amy Golden, Eric Heep, arts collective aLma.MaddR, and the Carillon trumpet quartet. In addition to his work in LA, Marks has presented internationally at the Darmstadt Fereinkurse für Neue Musik and the
International Society for Improvised Music 2016 Conference in Guelph, Canada. Marks holds degrees in trumpet performance from California Institute of the Arts (MFA 2017) and The University of Texas at Austin (BM 2013). His primary teachers include Marco Blaauw, Edward Carroll, Vinny Golia, and Ray Sasaki.