by Marc Cantlin II and The Walking Faces 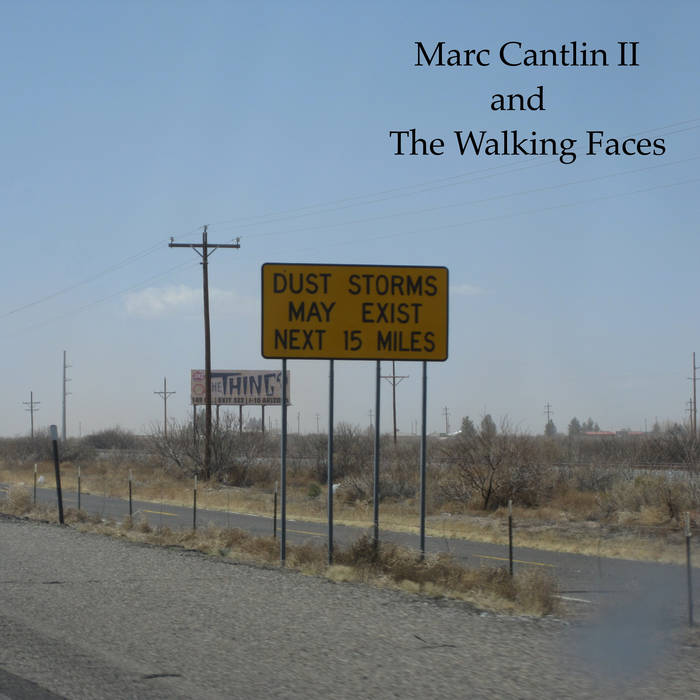 "This album will bite you in the ass while running from zombie tumbleweeds & prairie dogs with rabies; but in a good way!"
— Meggan Tori Cantlin

if you are enjoying "DUST STORMS may exist",
you might also enjoy "GUSTY WINDS may exist"
cosmicdigital.cosmicprimitive.com/album/gusty-winds-may-exist


MARC SAYS:
"5 and I have been experimenting with controlled sonic chaos for years. Our band Bruce was formed with the idea that we would not have “songs” but sonic soundscapes, largely predicated on the emotions and vibrations of the time, place, the specific moment really. All of the performances of Bruce were played with that in mind, so we were basically a new and different band every time we got together. Practice was always interesting, because we were never really practicing, at least not for the benefit of muscle memorizing the material that we were performing. What we were really practicing was a shamanistic ritual of reading the moment, channeling the energy of the space into sounds that we could make with our instruments. It isn’t as though it was or is a new idea, as many of the masters before us have done this well. Our inspirations came from all sorts of places, Ayler, Coltrane, Coleman, Davis, Ribot, the list is really endless.

"It is this very ideal that I am continually drawn to. I can’t remove that from my musical ability, as I managed to firmly entrench this ideal into my soul.

"Enter my recent foray into Los Angeles. 5 had gone to SXSW with Zinnia Su and on his return trip saw the existential signs of New Mexico that declare “Dust Storms May Exist, use caution.” He also knew I was coming to L.A. in a couple of weeks, so he suggested that we record a new album, a sequel to 'GUSTY WINDS may exist'.

"I decided that this time around, rather than worry too much about melodic content, I would focus on rhythm. I spent my time at home experimenting with as many rhythmic ideas as I could improvise, catching most of them with the voice recorder on my phone, so that I could go through and pick my favorites. I came up with four or five basic grooves and rhythms that I wanted to use, and decided what order they would go in based on what I thought was the best flow. I also intended for there to be some seriously unscripted noise to happen in certain places around those ideas.

"So, what actually happened is that we recorded three takes of my main rhythmic idea as a trio, with 5 on his Walking Faces setup (which is quite complex involving lots of effects and two amps), Patrick Lenon on drums and me on bass. I had wanted this particular section to be about three to five minutes in length, but the third take got away from us. It was beautiful. I think it was about twenty-five minutes in length originally. It basically is the entire first track of the album, but I chopped the ending off and used that in the last track.

"We were then joined in the studio by Ez, who took up the bass guitar, and Sheridan Riley (drums for Avi Buffalo, guitar and sing for Peg), who made percussion noises and melted them through various electronic devices.

"For the centerpiece, track three, Dust Storms Do Exist. I played as though a dust storm was actually happening in the studio. I attempted to convey that concept sonically to everyone else without stating it verbally. It is a little frightening for me to listen to at times, because I let myself go completely. It was a sonic abandon, and any sense of self that I have had been freed from its mortal chains, as I was to become a dust storm. At least, that was what I tried to do. The problem is, of course, that I have never seen or experienced a dust storm. It more or less worked as I wanted it to anyway.

"I am pleased with the end result. It is a more emotionally charged piece than 'GUSTY WINDS may exist'. It actually smacks me around when I listen to it, which can be rough at times, but in the end, while I didn’t follow my original plan exactly, it came out the way I wanted it to."